Happy 275th Anniversary!  It is already September and we are over halfway done, but there are still many events planned to commemorate this historic year (see anniversary calendar at this link).

On Sunday September 18th, I will hold my semi-annual Cemetery Walk. This time I plan to show some tombstones of the earliest settlers of the area who worshiped at the little log church, built in 1741, and the second larger frame structure, built in 1769.

Among the names of the earliest baptisms at the church are the Roth family. In fact, the first ten entries in the oldest Reformed Baptismal Record Book that is still extant all belong to the Franz Wilhelm Roth (Jr.) family and are as follows:

All of these children were blessings from the marriage of Frantz Roth (II) and his wife Johanna. Only Maria Magdelena was actually baptized at the time and entered into the new register, which was opened in May of 1783. The others were baptized at earlier times and their records were then entered into the record book before Maria Magdelena’s baptism on November 30, 1783.

Little is known at this time of Franz Roth (II) or his wife Johanna, except that he was the son of Frantz Roth and his wife Anna Margaret Grim, daughter of Egidius Grim of Wurtenburg, Germany. Both Frantz and Anna Margaret Roth are buried in the Roth family plot on the Old Cemetery. Anna Margaret was born 22 July 1727 and died 22 November 1746, and her tombstone is the oldest tombstone that can still be read in its entirety. Frantz, her husband, was born 19 December 1721 and died 28 December 1757. 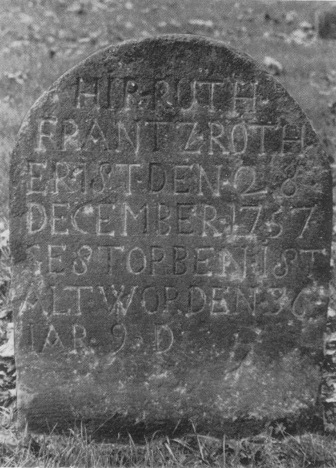 Frantz’s father, Heinrich Roth, is buried beside his son. Heinrich came to America with his wife Catherine and son Frantz in 1733. He was born 16 June 1688 and died in 1754. Unfortunately, the bottom portion of his tombstone has worn away and is no longer readable.

Heinrich Roth was very important to the beginnings of Jerusalem Western Salisbury.  In fact, it is he, along with Martin Bamberger, who donated the first two acres of land on which the small log church of the German Lutheran and Reformed faiths was built in 1741.  Later, in the fall of 1747, he attended the first Reformed Coetus (Synod) that was held in Philadelphia and was organized by the Rev. Michael Schlatter. He was the official delegate and he took some monies along with him from the congregation to try to secure a pastor. Unfortunately, it would take years until his hope of securing a regular Reformed Pastor was fulfilled.