Merchandise:  As you may have read in "History Highlights" last month, the committee has several items for sale as mementos for the upcoming Anniversary, which are available for sale (see photographs of these items on the 275th Anniversary Celebration News page).  The list of items includes our first sill sitter featuring Walter Chapman's conception of the original log church for $15.00.  Notecards featuring the "Four Seasons at Jerusalem Western Salisbury Church" can be purchased for $12.00 per pack.  "The Gospel in Stained Glass", a beautiful hard cover book created by committee member Israel Henry Kalb which depicts our 1926 stained glass windows, is available for $32.00. Any of these items, as well as the 1986 History Book and original sill sitter of the current church, may be purchased after church on Sunday mornings or at the office during the week.

Archives:  Several weeks ago when I was going through the archives, I came across a plaque, which was a memento for the 200th Anniversary in 1941. This wooden plaque contains a picture of the church with a picture of the bell that hangs in the tower up in the right corner. On the bottom in faded lettering it says "1741 Western Salisbury Jerusalem Church 1941." The plaque, which belonged to Octavia Reichelderfer, was donated to the church archives several years ago by her daughter, Nancy Joseph.  Other anniversary objects in the archives include buttons, mirrors and plates, as well as anniversary postcards.

Updates from Past History Highlights Columns 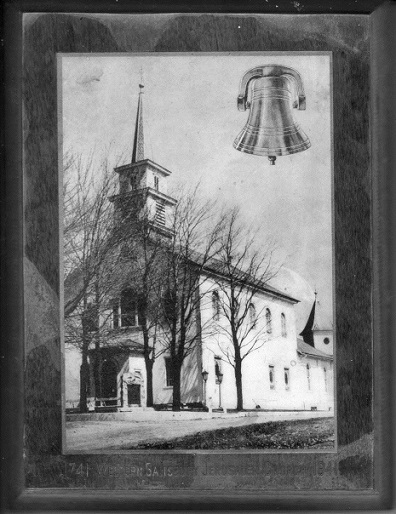 Western Salisbury Church Postcard, October, 2014:  I was delighted to receive a phone call and email regarding last month's column. It turns out that the person to whom the featured postcard was addressed is actually related to a family in our congregation. To review from last month, the postcard was addressed to "Esta Marsteller, Shimersvill [sic]" from "Mamma." My research revealed that "Esta" was Esther Victoria Marsteller (27 October 1897 – 29 November 1973). Esta is the aunt of Twilajean Marsteller Bergstresser and the great aunt of her daughter, Charlene. It is a small world; Twilajean's father David, was Esta's brother and Twilajean and Charlene were both close to Esta and her husband Edwin. The Marsteller family farm still exists in Shimersville and is just off of St. Peter's Road, where Esta and David's parents, Harvey Franklin and Sallie I. (Fetterman) Marsteller raised a large family. Twilajean also relates that Sallie Fetterman, her grandmother, may have been a member of our church at some point. The above picture was uploaded to the Ancestry.com website by a family member. Esta and her husband, baby and most of the Marsteller clan are buried in the cemetery at Old Zionsville Lutheran Church.

There were several factual errors in the Church Camp history article that were brought to my attention by longtime camper and staff member Steve Moyer, which I will present for the record.  Church Camp began as "Choir Camp" back in 1970. The first two years were held at Camp Kline (1970 and 1971), and then the camp moved to French Creek State Park, Group Camp #1 in 1972. After several moves, the camp has been held since 2009 at French Creek Group Camp #2.  Before the French Creek Pool was built, the campers used to swim in the lake. Eventually the state would not allow swimming in the lake anymore and instead the Piersols, who lived nearby, graciously offered their property for swimming for the campers for several years.  Finally, I erroneously reported that the person coming to camp for the most years was Neil Moyer, when in fact it is actually his son Steve Moyer. Steve Moyer was present at the very first camp in 1970, and every camp since that time except for 1991, when he had first moved to Illinois. His father Neil missed the first year and last year, 2013, but we were very happy to have Neil back at camp in 2014.