This spring, I had several opportunities to give tours on the cemetery, and one of my curiosities about the cemetery is regarding the tombstone cutters/makers. Sometimes cutters were itinerants who moved from place to place, and other times they lived in the community. Sometimes, the cutters signed the tombstone at the bottom and other times they did not. 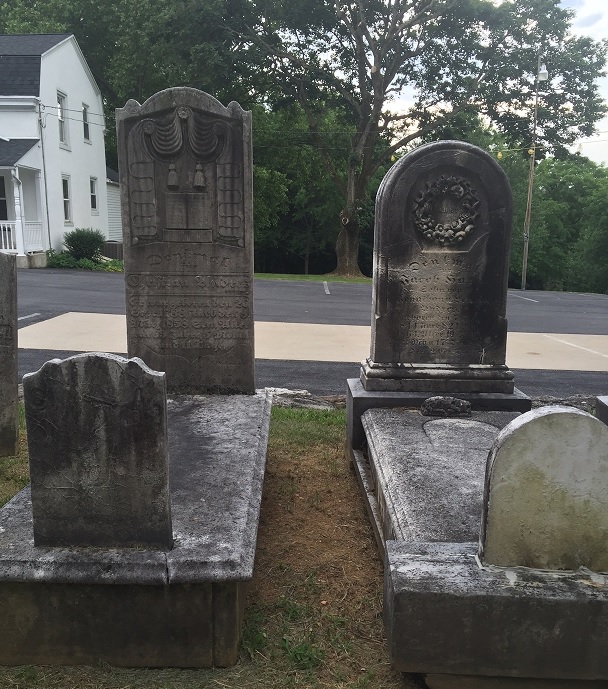 Tombstones in the Old Cemetery signed by T. J. Schmeyer of Allentown, a tombstone seller and cutter

Even if the tombstone cutter signed their work, sometimes it is impossible to read the signatures any more due to the weathering or the fact that the ground level has gotten higher over the years and the signature is now below ground.

At the end of May, Parish Coordinator Linda Held and I discovered that two tombstones (that were beside each other) were signed by the same person: "T.J. Schmeyer" and "Schmeyer." So I did some research to discover just who this person was, and found out that T. J. Schmeyer was Tilghman Jacob Schmeyer (19 Jan 1825 -- 20 Nov 1913), a tombstone cutter and dealer in marble and granite in Allentown for over fifty years.

The 1860 Census records him as living with his family in the 2nd ward of Allentown. Interestingly, he is listed as "Master Stone Cutter" and also had three apprentice stone cutters living with his family, Wilson Weider, age 18, Walter Losh, age 16, and Charles Gunkelwine, age 21. The trade was taught by the master taking on apprentices, who learned the trade and also helped the master. After an apprentice finished his apprenticeship (usually after 7 years), he could become a journeyman and either go out on his own or stay with the master and work for him. Most of the trades many years ago were learned in this way. 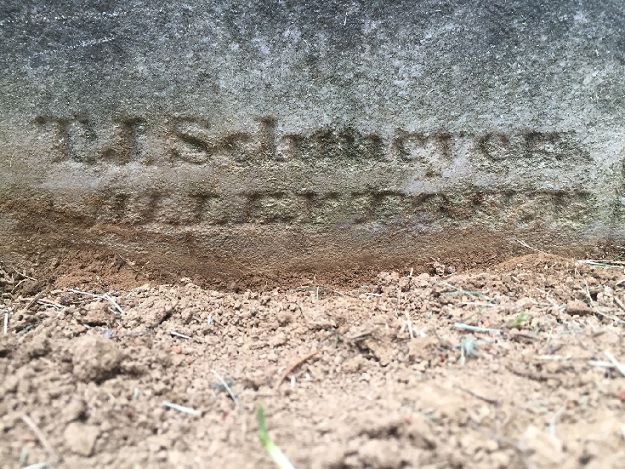 The "Signature" of tombstone cutter T. J. Schmeyer (Schmoyer) at the bottom of the tombstone of Daniel Eberhard in the Old Cemetery

He was born Jacob Tilghman Schmeyer, the son of Benjamin and Maria (Kuntz) Schmeyer, however, he always signed his name the other way. He assisted his father on the farm in Macungie Township and later taught school. On 20 December 1846, he married Elizabeth Wicket (17 July 1827 -- 18 Oct 1877), the daughter of Henry Wickert, and they had ten children. The Schmeyers are buried at the Fairview Cemetery off of Lehigh Street in Allentown, where, I suspect, many other examples of his tombstones also reside.