As one looks through the church records, one finds that this church has had a history of long pastorates. It would seem that the pastors were pleased with their people and the people were pleased with their shepherd, so the pastors stayed for a very long time. A photograph of one of those pastors with a long pastorate at the church used to hang in the annex for many years. That pastor was Rev. Dr. Daniel E. Schaeffer, who was the pastor of the Reformed or UCC congregation for 47 years. This entry we will look at a few details of his long life. 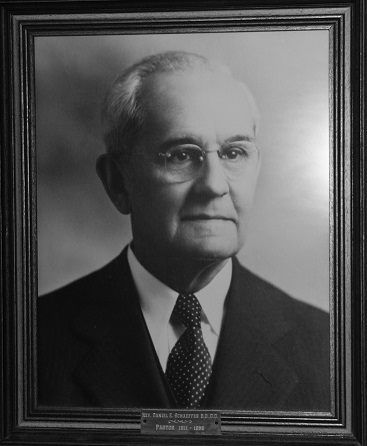 This portrait of Rev. Daniel E. Schaeffer hung in the annex of the church for many years.

Daniel Edgar Schaeffer was born on October 26, 1872 in Richmond Township, Berks County, the youngest son of John S. and his wife Magdelena or Molly (Peter) Schaeffer. He was a direct descendant of 2nd Lieutenant Philip Jacob Schaeffer, who served during the Revolutionary War in the 4th Battalion of the Continental Line. He grew up on the family farm, attended Kutztown public schools and prepared for college at the Kutztown State Normal School. Later, he entered the Franklin and Marshal College, from which he graduated in June of 1895. After attending the Lancaster Theological Seminary, he graduated from that institution in May, 1898 and was ordained by the Lehigh Classis at Gernant's Church, Leesport. He assumed the four point Leesport charge, which he served until 1911, when he came to the Salisbury charge, which at that time consisted of St. John Reformed, Emmaus and Western Salisbury. 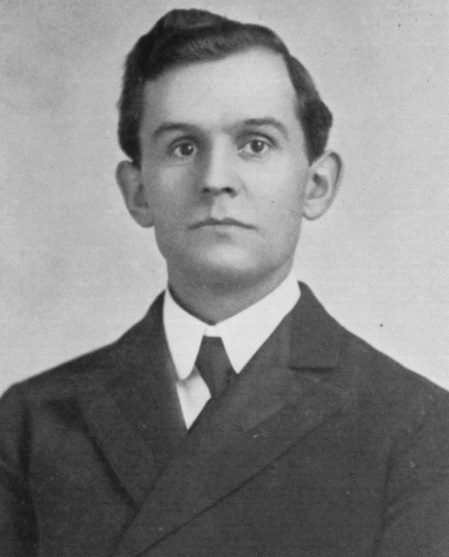 Rev. Schaeffer began his ministry at Jerusalem Western Salisbury on May 7, 1911, however he was not the first Schaeffer to be called as pastor. His older brother, the Rev. Charles E. Schaeffer, had served the Reformed congregation from his ordination on June 19, 1892 until 1896. Rev. Daniel E. Schaeffer's first pastoral act at our church was the funeral of Anna Amanda Funk, widow of Samuel Funk, who died on May 21, 1911. His first baptism was that of Viola May, daughter of Elmer E. and Clara (Lynn) Stephen on August 12, 1911. His wife Annie died on June 21, 1921; he would remain a widower for the rest of his life.

In the 1937, the Salisbury charge was dissolved and so Rev. Schaeffer no longer served St. John's, Emmaus, but rather remained the pastor of the Western Salisbury Reformed Congregation. In 1950, Rev. Schaeffer received the doctor of divinity degree from Franklin and Marshall College. During his years of ministry, he served on the board of the Lehigh Classis of the Evangelical and Reformed Church and was one of its Past Presidents. He was also a roll clerk of the Lehigh Synod.

He retired from Jerusalem Western Salisbury on January 1, 1958. He was named Pastor Emeritus of the UCC congregation of our church, as well as of St. John's UCC, Emmaus. The numerical record of his pastoral acts during his 60 year ministry is remarkable: 1,700 baptisms, 1,575 confirmations, 634 weddings and 1,376 funerals. Rev. Schaeffer also delivered over 6,000 sermons. After he retired from active ministry, he continued to fill in on a part time basis for pastoral acts, but did not want to deliver sermons. Near the end of his life, Rev. Schaeffer lived with his daughter Emily at 723 N. 2nd Street in Emmaus. He moved to the Phoebe Home towards the end of November, 1967, where he died on December 11, 1967 at the age of 95 years, 1 month and 15 days. 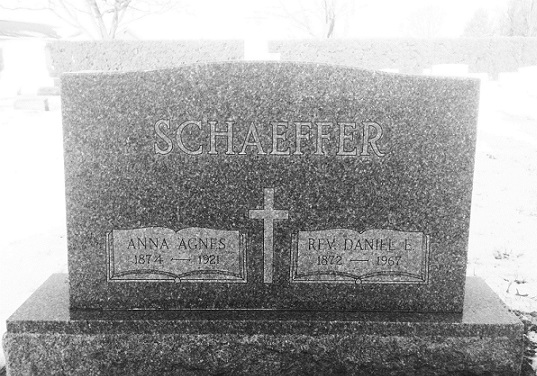 The tombstone of Rev. Daniel Schaeffer and his wife Anna at the Fleetwood Cemetery in Berks County, where his parents and paternal grandparents are also buried.

Funeral services were held at Jerusalem Western Salisbury Church on Friday, December 15, 1967 with interment beside of his wife in the Fleetwood Cemetery. His parents, John S. and Mollie, as well as his paternal grandparents, Daniel Schaeffer and Margaret Sell, are also buried in this cemetery in Berks County on a nearby plot. Thus concluded the life of a faithful servant of the Lord.