Happy 275th Anniversary! I can hardly believe it, but the anniversary year is beginning to wind down; however there are still plenty of events left to celebrate this historic milestone (see the calendar at the end of the article.) Last month, I put a small display of some of the pictures of people of the church from the past. The church is really not just a building, but rather the people that use the building to do ministry. Hundreds of people have been part of this church over its long history and the display included photographs of faces both known and unknown. One of those pictures that I had displayed was a rather large photograph, printed on linen. People were intrigued by the faces, which appear below.

Augustus Reinhard was the great grandson of Johann Adam Reinhard (1724 – 1806), the immigrant ancestor who came from Germany to America, arriving in Philadelphia on 26 September 1741. His son Hartman was a farmer in Salisbury Township and lived at the bottom of the hill below the church at the Rathburn Bridge in the farmhouse, which has since been remodeled. Hartman’s son Henry, who married Catherine Biery, was the father of J. Augustus Reinhard. 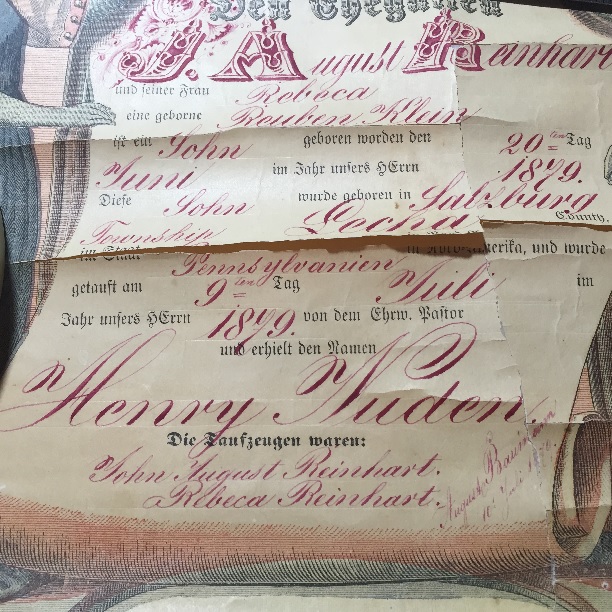 Henry Newton Reinhard, whose baptismal certificate appears above, had four children, Wilbur, Dorothy (Marlene Bergstresser’s mother), Paul, and Arlene (Barry Snyder’s mother). The baptismal certificate was in pretty bad shape (in pieces) when Marlene gave it to me to “put back together,” much like a puzzle. It is a beautiful example of a Fraktur, signed by its creator August Baumann.

This family has had many descendants, many of whom have continued to be associated with Jerusalem Church and rest eternally in the cemetery.