Since 1889 (according to available records) a Memorial Day Program has been held at Western Salisbury Church. Currently, the event takes place on the Sunday prior to Memorial Day, beginning with a march through the cemetery at 9:00 a.m. and a program with music and a guest speaker following in the church. After the parade, participants gather at the Veterans Memorial, dedicated to veterans who are buried on the cemetery, as well as veterans who have belonged to our church. The monument's location and configuration have changed, but the sentiment behind the monument remains the same: to remember those who have served. 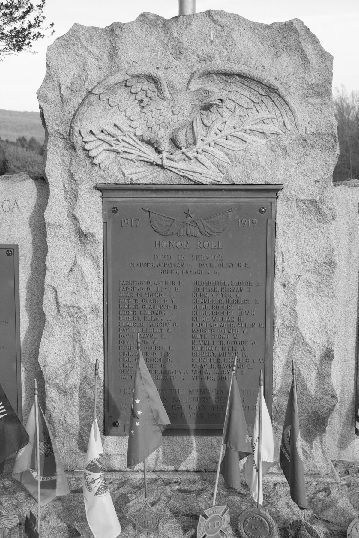 The original part of the monument, the center portion, with the eagle on the top, dates to 1921. In that year, the congregational members raised $1167.00 to place the stone monument at the front of the church, under the trees, at that time called the "Soldiers and Sailors Monument." The plaque on the front of the monument pays tribute to those whose served in the World War (now known as World War I). It lists the names of the 31 men who served and returned home to the United States. It also lists the three men who died in action and gave the supreme sacrifice during the war: Clinton G. David, Jonathan Paul Clauser and Franklin Reuben Koser. Only one of these soldiers now rests in our cemetery.

The first member of our congregation to die in the action of World War I was Clinton G. David. He was a private in the U. S, Army and fell at the Chateau-Thierry sector, near Belleau Wood, France on June 6, 1918. The son of Aaron Victor David and Jane Rebecca (Kehm), he was born on December 1, 1893 in Lower Macungie Township. He was baptized on June 7, 1894 by Rev. C. E. Schaeffer and confirmed by Rev. Myron O. Rath on October 24, 1909. Clinton was employed by the American Steel and Wire Company in Allentown, before entering the U. S. Army on June 30, 1917. He was stationed at Columbus, Ohio, for one month, and then later for another month at Syracuse, New York. He left for overseas as a member of the 23rd Infantry in September, 1917. Less than a year later, he gave his life for his country.

Memorial services were held in his honor on September 22, 1918 at the church. The text was the fourth chapter of Paul's Second Letter to Timothy, the seventh verse ("I have fought a good fight, I have finished my course, I have kept the faith.") Rev. Myron O. Rath preached a rousing memorial sermon. Clinton's actual burial place is unknown. His parent's tombstone on our cemetery (Section B, Lot 76) contains the following tribute to their son: "Our dear loved one lost in the war. We honor him with the gold star." 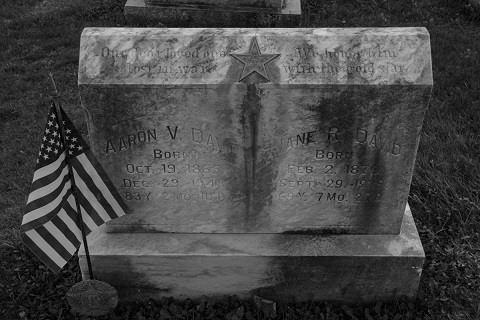 On September 28, 1918, Jonathan Paul Clauser was killed in action while serving at Argonne Forest, France. The son of George Clauser and his wife Emma (Scholl), he was born on November 7, 1892. He was baptized by Rev. A. J. G. Dubbs and confirmed at Western Salisbury Church by Rev. John Baer Stoudt on November 14, 1908. Before entering the service, he had served faithfully as a deacon of the Reformed congregation.

While serving as a private of Company K, 316th Infantry Regiment of the 79th Division, he was killed fighting for his country during the Meuse-Argonne Offensive. On December 28, 1918, a memorial service was held in his honor at the church by his pastor, Rev. D. E. Schaeffer. The text for the memorial sermon was the fourth chapter of James, verse fourteen ("Whereas ye know not what shall be on the morrow. For what is your life? It is even a vapor, that appeareth for a little time, and then vanisheth away.") He is buried in Argonne, France at the Argonne Cemetery, lot 83.

Franklin Reuben Koser died on November 7, 1918, only four days before the Armistice with Germany was signed. Franklin was the son of David M. Koser and Mena M. (Dress) and was born on January 17, 1896 in Allentown. He was baptized on June 8, 1896 and confirmed by Rev. Myron O. Rath on October 22, 1911. Before joining the service, he had been active with the Mountainville Fire Company, No. 1. He left with the drafted contingent of Camp Meade on September 19, 1917 and was later attached as a private to Company L, 316th Infantry, Liberty 79th Division. His company sailed for France on July 7, 1918 and two months later he was gassed and hospitalized for a week. Afterward, he rejoined his company, at which time he was part of the Meuse-Argonne Offensive and lost his life on Hill 378. Koser is the only one of the three men who gave the supreme sacrifice during World War I to be buried in our cemetery. He is buried alongside his father and mother in Section B, Lot 72, age 22 years, 9 months and 20 days. 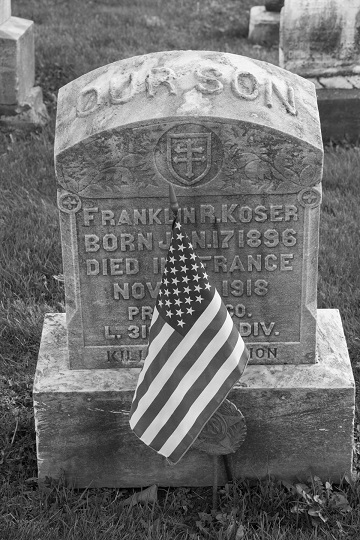 The Soldiers and Sailors Monument, now part of the Veterans Memorial, is a lasting reminder of the sacrifice that these three men made during World War I. The monument serves as the only memorial on our cemetery to Jonathan Paul Clauser, who is buried in France. Years later, the Soldiers and Sailors Monument would be moved to its present location and since then, four additional monument stones have been added to it, making it the five panel monument we have today.