As we approach Holy Week, I thought we might look at the history of something that we look at each week when we worship in the sanctuary: the Gethsemane painting and fresco paintings above and behind the pulpit. The subject of the main painting is an object of devotion for many. 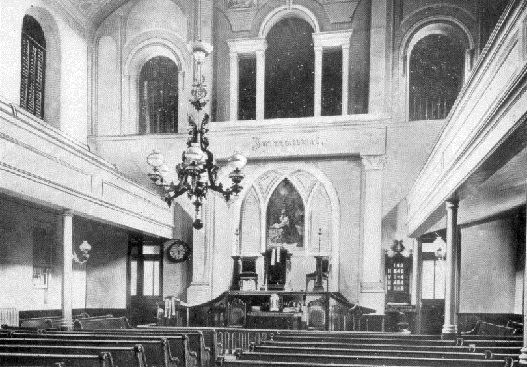 Earliest Picture of the Sanctuary of Jerusalem Western Salisbury Church, circa 1911, showing the Gethsemane painting, but not the cherubs, wheat or grapes.

The painting of Jesus praying in the Garden of Gethsemane is based on the scripture passages Matthew 26:36-46, Mark 14:32-42 and Luke 22:39-46. It is a tender moment when Jesus prays to God to stop this suffering which he is about to endure, but he states that it is God's will and not his own that will be done.

The date of the paintings in our church has not been firmly established over the years, as the records do not indicate an exact date that the Gethsemane painting, in particular, was done. The earliest picture of the sanctuary comes from the 1911 History Book, which shows the Gethsemane painting, but not the cherubs and the wheat and grape panels. Instead those panels are plain. For many years, it was believed that the Gethsemane painting may have been done when the chancel was rebuilt in 1884. However, in preparation for the 1986 History Book, Lorraine Weida and Gladys Rader interviewed Mrs. Sarah Louisa (Fink) Schmoyer, grandmother of Rev. Carl R. Schmoyer. She remembered the painting when she was confirmed at the church on Sunday, October 24, 1909, when she was sixteen years old, but not before that. So it is probable that the painting was done somewhere around 1909. 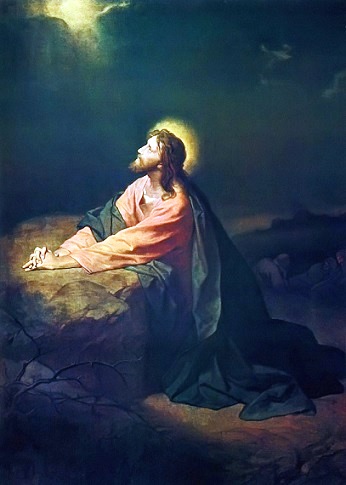 "Christ in the Garden of Gethsemane" by Heinrich Hofmann (1890)

As for the subject of the painting, I have seen other examples of paintings or stained glass windows in other churches that look very similar to our painting. So I decided to do some research about the painting itself. It turns out that our painting is based on an original oil painting called "Christ in the Garden of Gethsemane" by a German painter, Heinrich Hofmann (19 March 1824 -- 23 June 1911). He completed the painting in 1890. The original of this painting is at the Riverside Church in New York and over the years, this painting became a popular object of devotion that was copied by other artists. The original colors in the painting are different, such as Jesus' robe is blue in Hofmann's painting, rather than red as in our painting, but otherwise the overall composition is the same.

So this painting probably dates to around 1909, a little more than hundred years ago. For our 275th Anniversary, the Anniversary Committee and the Building and Grounds Committee are looking into having the chancel paintings restored. The last time this was done was in 1953 when the Beck Wilhelm Decorating Company restored the paintings at cost of $992.30. The restoration was a gift of Clarence Hildebeidel in memory of his father, John T. Hildebeidel.

The Building and Grounds Committee is currently searching for a qualified art conservator, who can come to the church to give us an estimate of the costs of restoring the paintings. The cost this time will be much more substantial, but would again would make a lovely memorial to that special loved one.

Watch future "History Highlights" articles for more information on the restoration project. In a future article, we will also look at the history of the cherub, wheat and grape frescoes paintings around the Gethsemane painting.