I spend many a day browsing through old newspapers on microfilm. Recently, I found an interesting article in the April 27, 1904 edition of The Allentown Democrat Newspaper. On page 3, column 1, the following appears:

CONCERT BY THE EMAUS-SALISBURY CHORAL SOCIETY" The Emaus-Salisbury Choral Society will give its annual concert in Jerusalem's Union Church, in western Salisbury, on Sunday afternoon next, May 1st at 2 o'clock. The well known ability of the society, and the preparations they have been making, will insure the people of the vicinity an excellent entertainment, something that with the object of it should fill the church and give the society the encouragement they deserve for devoting their time and attention to so worthy of a cause. A silver offering will be lifted to defray the necessary expenses...

This interesting article was the first that I had ever heard of such a Society. I took some time to look through our history books and could find nothing noting the existence of this Society. From the beginning of the article, it indicates that this is an annual performance, so presumably there was a performance of the group at least in 1903. How long they continued, I am not sure either. Examining the names of the participants, my hypothesis is that this society was made up of choir members from both Western Salisbury and Emaus Union Churches; both choirs, at the time, were under the direction of Professor Edward F. Strauss, who more than likely created this group. 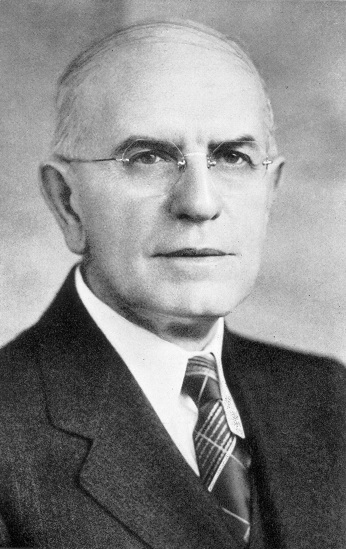 As I have mentioned in earlier articles, we have had a history of long pastorates, but we also had a very long serving organist, for almost 57 years, and that was Edward F. Strauss. His obituary in The Morning Call on April 28, 1948 stated the following of his service to Jerusalem Western Salisbury Church: "Prof. Strauss is believed to have been the only organist and choirmaster to have served one church for that length of time in Pennsylvania."

It was truly a remarkable length of service to one congregation, but entirely understandable considering that he was a son of the congregation. Edward Francis Strauss was born on 13 June 1874 in Lower Macungie Township, the son of farmer Benjamin F. and Sarah A. Klein Strauss. He was baptized on 13 September 1874 by Rev. William Rath and confirmed by his son, Rev. Myron O. Rath, on Sunday, November 3, 1889.

He attended the schools in Lower Macungie Township and graduated from Emmaus High School in May, 1896. He began his studies in music at the age of seven, under the direction of Professor Dr. Clement A. Marcks. He studied pipe organ at Zion's Reformed Church and St. John Lutheran Church in Allentown. At the age of 10, he became the organist for the Riegel's Sunday School, a position he would hold for twenty eight years. In 1888, he started to play for the Western Salisbury Sunday School. On October 21, 1891, he was unanimously elected as the organist and vocalist for Western Salisbury Church at the age of 17, replacing Morris S. Bieber, who had served since 1886.

In addition to serving Western Salisbury, he served as organist of St. John's Lutheran and Reformed Church, Emmaus, from 1901 to 1921. He taught private music students for many years and taught school in Emmaus and Western Salisbury Township Schools for 29 years. He was also an accountant for P.P.and L. for 13 years, retiring from that position in 1943.

Edward F. Strauss, organist of Jerusalem Western Salisbury Church for 56 years ended his earthly labors on April 27, 1948. Appropriate services were held on Sunday, May 2, at 11 a.m. in the church sanctuary, with burial in Section B, Lot 18 of our cemetery, joining his parents and son who predeceased him. And thus, a small article in The Allentown Democrat one hundred and ten years ago this month, has shed light on a more or less forgotten piece of history of our beloved Jerusalem Western Salisbury Church.