In November 2013, citizens of the United States paused to remember the 150th Anniversary of Lincoln's Gettysburg Address. In July 2013, thousands of visitors descended onto the Gettysburg battlefield to celebrate the anniversary of the battle that took place between July 1 and 3, 1863, considered to be the turning point in the Civil War. Four months later, on Thursday, November 19, 1863, President Abraham Lincoln and others gathered on a portion of that same battlefield to dedicate it as a cemetery to the memory of those who "shall not have died in vain."

At left: the 153rd Regiment Monument, one of two monuments at Gettysburg to those who fought in July, 1863.

Because of these connections, I thought it would be interesting to talk about those Civil War soldiers who are buried on our cemetery that also fought at Gettysburg. Of the 30 Civil War soldiers confirmed to be buried here, only two fought at Gettysburg and neither of them died in service to their country. On a recent cemetery walk held September 29, 2013, we visited the graves of these two brave soldiers who witnessed one of the most important battles of the Civil War: William Richard Moser and Rudolph Schmeltzly.

Both of these two veterans of the Civil War served in the 153rd Regiment, Pennsylvania Volunteer Infantry. The Regiment was raised in Northampton County in response to Lincoln's call for 6000 men in September, 1862, and consisted of ten companies, all under the command of Major John F. Frueauff. The regiment was sworn into Federal service on October 28, 1862, for a nine month term of service, and left Harrisburg on October 12 for Washington, D.C. The regiment went into winter quarters near Potomac Creek Bridge until April, 1663, when they joined with the 11th Corps at the Battle of Chancellorsville, which was fought from April 30 to May 6, 1863 in Spotsylvania County, Virginia. During the battle on May 2, General Stonewall Jackson's men attacked the Union Army's right flank, where the 153rd was posted. The regiment was broken and disorganized and lost 19 men to death, along with 56 wounded and 33 captured. After the battle, the men marched back to Potomac Creek Bridge.

On June 12, 1863, the Regiment would march northward toward Gettysburg. They entered Emmitsburg, Maryland, and then on July 1, 1863, marched up Washington Street in Gettysburg to meet the enemy a second time. One of the battle monuments records the service of the regiment at Gettysburg: The 153rd Pennsylvania Infantry, 1st Brigade, 1st Division of the 11th Corps. On July 1, the Regiment held the position on Barlow's Knoll in the afternoon until the corps was outflanked and retired, when it took position along the lane at the foot of the East Cemetery Hill, where it remained until the close of the battle, assisting to repulse the enemy's assault on the night of the 2nd. The regiment lost 1 officer and 40 men that day, and 7 officers and 117 men were wounded. A total of 46 men were captured or missing as a result of the campaign. Until July 14, the regiment was in pursuit of the enemy and finally mustered out of Federal service on July 23, 1863.

The first of our Civil War veterans to serve at Gettysburg in the 153rd Regiment, William Richard Moser (11 December 1840 - 2 December 1913), was born in Lower Nazareth Township, the son of William and Margaret Moser. He worked on the farm until he joined Company A of the 153rd Regiment as a Private. This company was from Nazareth and was under the command of Lieutenant Benjamin Schaum. After the war, he worked as a carpenter. About 1868, he married Livy Barndt and they had four children, Albert, Robert, Anna and Jacob. After 1876, he and his family, moved to Westfield Township, Medina County, Ohio and farmed there until he came to Salisbury Township, where he continued to farm a 17½ acre farm. He died in 1913 at the age of 72 years after having been ill for several years. His funeral was held at his home in Mountainville at 9:30 a.m. on Sat., December 6, 1913, with services later that day at the church and burial in the cemetery. 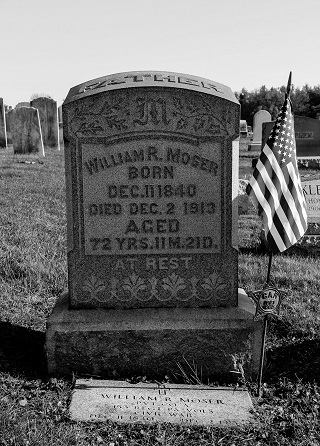 The other Civil War veteran who served during the Battle of Gettysburg was Rudolph Schmeltzly (10 April 1842 - 12 August 1887). He was born in Baden, Germany, the son of Joseph III and Josepha Schmeltzly, and came to America along with his parents and brother in 1854. He enlisted in Company C of the 153rd Regiment as a Private on October 8, 1862. This company was from Saucon Township and was under the command of Captain Henry J. Oerter. After serving in the Civil War, he married Sallie Ann Kehm on November 20, 1868 and they began a family. He died on August 12, 1887 at the age of 42 and was buried in our cemetery by Rev. Myron O. Rath. 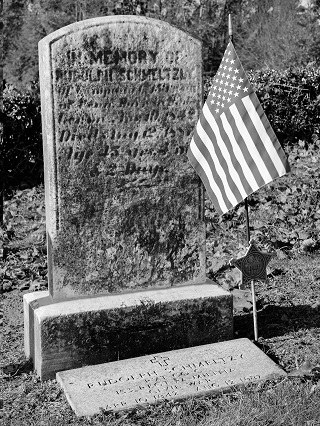 I have am very pleased that people are so interested in the rich history of our church and the area. If you have a curiosity about our church and its history or would like to share any artifacts, pictures or other memorabilia of the church, please contact me through the church office or at Finkyx@aol.com.