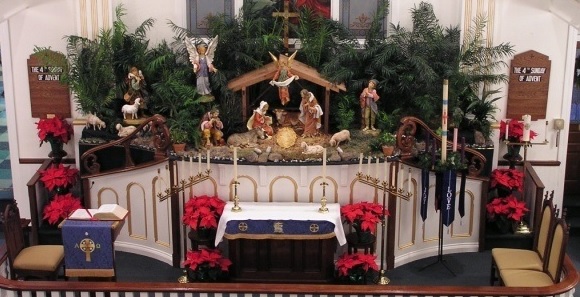 As Advent approaches, we begin to make preparations for Christmas, both in the home and at church. Preparations are being made to decorate Jerusalem Western Salisbury Church for the seasons of Advent, Christmas and Epiphany. Each year, we choose a color/theme for decorations. Last year, I was asked when we were going to decorate with the "colonial" decorations again, for the person remembered that many years ago we had decorated with that theme. If you recall, the balconies and banisters of the stairs of the church were decorated with real evergreen garland, accentuated with cranberry strands, dried apples and orange slices, and with wreathes that featured whole apples. Above the front door on the outside (in front of the “1741” stained glass window) hung a green panel with whole apples and, in the center, a real pineapple. The decorations were a beautiful sight to behold and that is why people remember them.

An apple and pineapple display similar to the one that hung over the front door of the church in years past, an example of Colonial Williamsburg-style decorations.

Since that time I have done research into what type of decorations would be appropriate to our colonial-style church and have found that these types of decorations, with the rich colors of fruits and vegetables, are not authentic to the period. Instead, the idea of decorating with fruits and vegetables is attributed to Colonial Williamsburg where the pineapple is a historic symbol of hospitality. However, our colonial Pennsylvania German farmers would have never wasted food for frivolous decoration.Unfortunately, there are very few contemporary sources in the 18th Century that can tell us how our forbearers decorated.  In Colonial America, contemporary prints reveal that sprigs of holly fill containers such as vases, as well as being hung from windowpanes.  From the available sources, it would seem that the most appropriate Christmas decorations for would actually be very simple decorations: greens strung into a garland or hanging from their branches vertically, accented with holly sprigs and berries.

Besides greenery to decorate the church, we also decorate the church each year with a large Christmas tree, a 19th century tradition. Scholars agree that the Christmas tree is certainly a German tradition that was imported to the rest of the world. The folk tradition is that none other than Martin Luther was inspired to bring a tree into the home and light it with candles after a walk in the woods, during which he looked at an evergreen tree with the stars positioned behind it and was in awe at its beautiful sight. The first instance of a Christmas tree in America is usually attributed to the Moravians in Bethlehem in 1747.  These, however, were not actual trees, but rather wooden pyramids with evergreen branches attached to them. In the book, Christmas in Pennsylvania by Alfred Shoemaker and Don Yoder, the historians cite one of the earliest written sources of the Christmas tree in Pennsylvania in the Easton Sentinel of December 30, 1836: "We have heard some matter of fact Misanthropes denounce the extraordinary dinners – the exchange of presents – the passing of the compliments of the season … together with Christmas trees and New Years firing, as idle and unmeaning ceremonies…" Another aspect of early Christmas trees in America was that they were usually table top trees, not the large trees that we are accustomed to bring indoors today.  Again, it seems fairly certain that in the early years, the practical Pennsylvania Germans would not have wanted to chop down a large tree to decorate the inside of the house.

The other major decoration that dominates our sanctuary is the Nativity scene or crèche, a depiction of the birth of Christ. The display that I set up each year with the beautiful Fontanni figures imported from Italy is actually an elaborate "putz," a Pennsylvania German tradition that dates to the 18th century.

Over the years, putzes have become more and more elaborate with the addition of villages, people and trains, however, the focus still should remain the Nativity Scene.  If you are interested in learning more about Christmas at Jerusalem Western Salisbury, come to the church on Saturday and Sunday, December 20 and 21 at 1:30 p.m.  when we will gather in the sanctuary for a special Christmas Church Tour.  I look forward to seeing you there, and I wish you all a most blessed and joyful Christmas holiday season.

I am very pleased that people are so interested in the rich history of our church and the area. If you have a curiosity about our church and its history or would like to share any artifacts, pictures or other memorabilia of the church, please contact me through the church office or at Finkyx@aol.com.