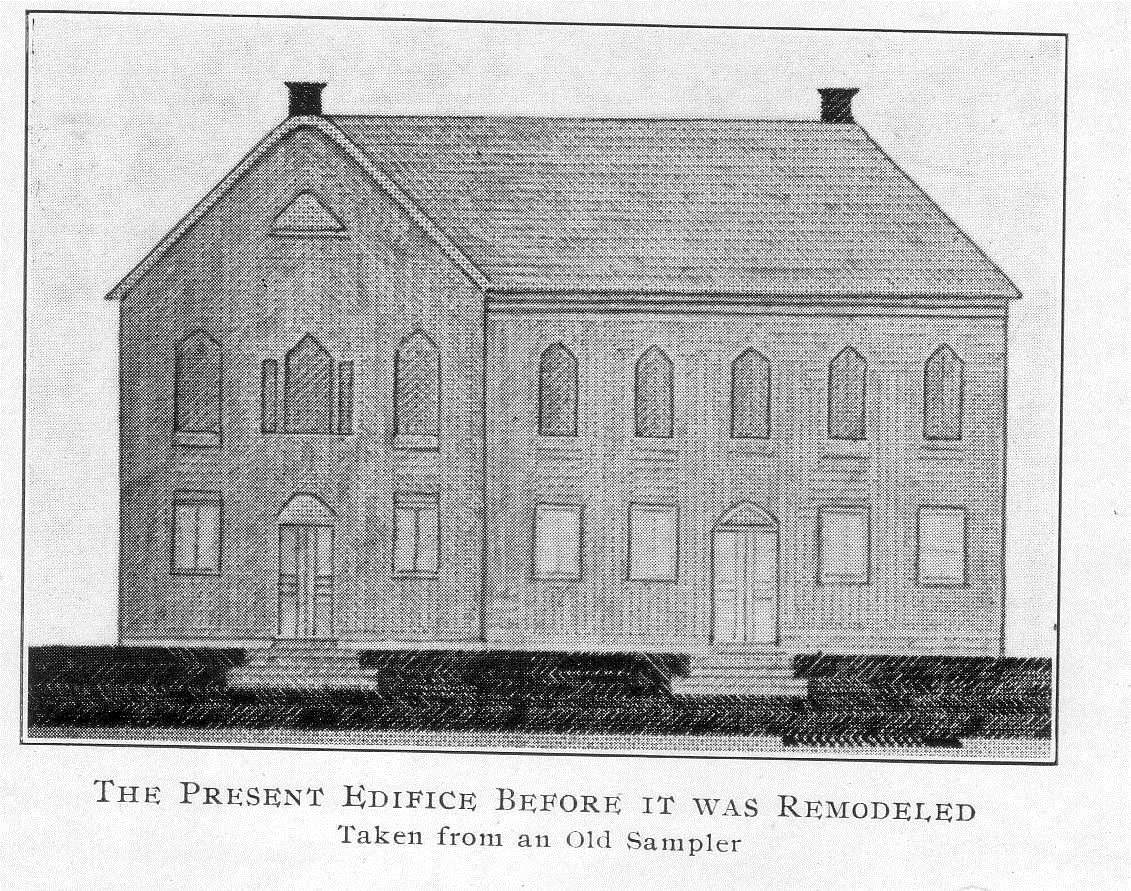 The present church building was built in 1819. We are able to know what the church looked like from the outside in 1819 because of the sampler that was donated to our church in 1931. But what did the church look like on the inside in 1819? Since there are no photographs, in 1986, the late Walter Chapman examined all of the evidence from the previous church histories, as well as the physical evidence in the sanctuary today. He drew two conceivable floor plans of what the layout of the inside of the church might have looked like when it was built in 1819, as major renovations were made to the church building in 1884, which gave the sanctuary the present basic floor plan.

We already know that the church had three entrances and the main entrance was on the long south wall of the church, along Old Devonshire Road. This meant when you walked into the sanctuary from the front door, everything was oriented toward the front of the church, which would have been the opposite or long north wall, along the Old Cemetery. The pews would have been oriented toward the chancel and pulpit, which were placed in the middle of the wall between the two upper windows on the left and the two upper windows on the right (presently, if you look up at that wall, there are only three windows visible, one on the left and two on the right, as the organ chamber obscures the other window.)

The church was built in the typical German meetinghouse style, so there were three balconies or galleries. The main gallery, where an organ was placed in 1836, was probably the balcony that still exists on the south wall (with some renovations for pews and stairs in 1884.) The other two galleries were on the west and the east walls (today there is no gallery on the east wall; that is where the pulpit and chancel are now located.) There were steps leading to the galleries on the west and east sides of the south balcony. 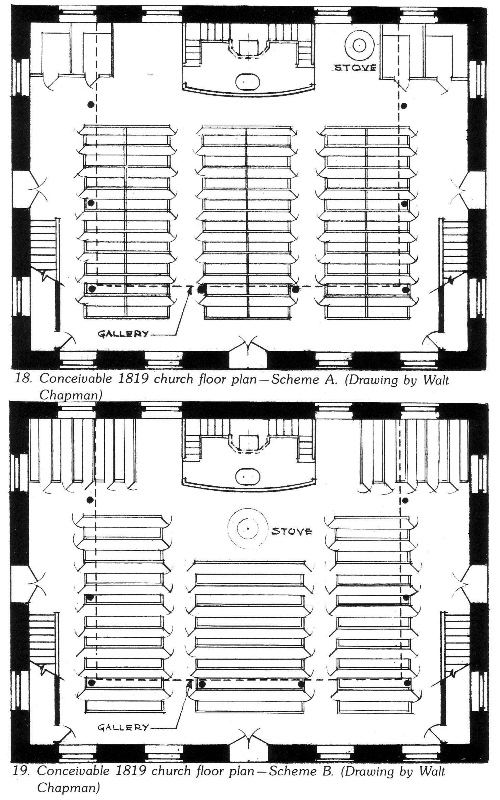 The pews of the church in 1819 were all facing the pulpit on the north wall and had straight backs, typical of the time period. They would have been without cushions and had "swinging" doors along the sides to keep out the draft. The pews were designed to keep the parishioner attentive to the word, as the straight back would keep the person sitting in an erect position.

So what did the pulpit and chancel area look like in 1819? The pulpit was a typical wine glass pulpit with a "stem" and steps leading to the pulpit on both sides (the preacher may have been as high as the present balcony). The 1911 history book has a photograph of a pulpit similar to ours reproduced below.

In the 1986 History book, Mr. Chapman provided a drawing of what the pulpit and chancel might have looked like in 1819 at our church. Above the pulpit, was a "schall deckel" or sounding board, the precursor of an audio sound system. The sounding board hung from an ornate bracket attached to the wall. Depending on the lighting in the church, you can still see the circle in the wall indicating where the sounding board hung. In the oval chancel area, more than likely with an altar rail to set it apart from the rest of the church, would have been the original altar table, which we still have in the chapel today. It had an oval shape and while it unfortunately now has a large crack on the top, nonetheless we still have this altar table, a link to the 1819 church. Also, in the right display case in the vestibule, you can see ornamentation from the original pulpit that has been preserved.

The 1911 History book records a story of just how high the pulpit was in 1819 (pg. 63): "The pulpit was rather high and it is alleged that on one occasion a visiting clergyman, being small of stature, entered it to preach and that his head was barely visible to the audience. One of the deacons noticing the embarrassing position of the minister went out and brought in an armful of bricks and placed them on the floor of the pulpit." 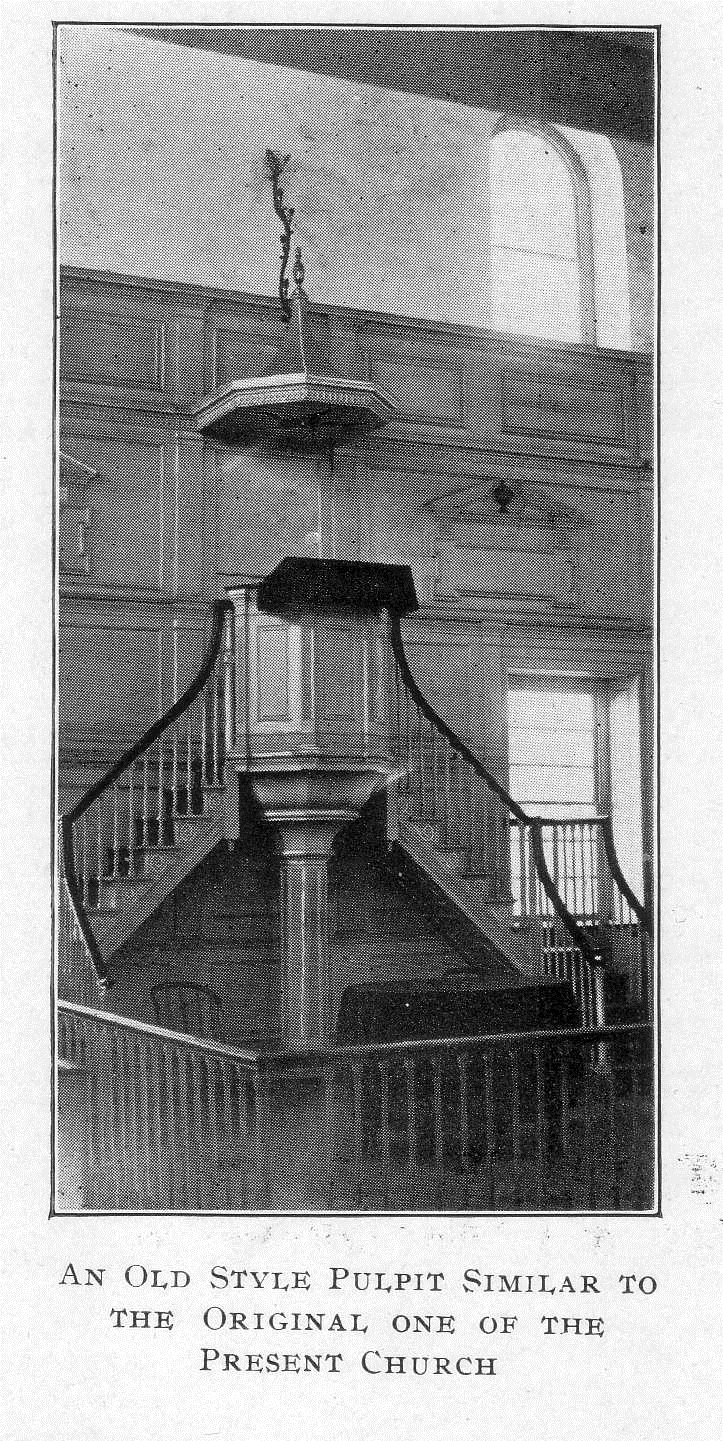 If you examine the drawings of the floor plan of the church in 1819 from Mr. Chapman, you will also notice the probable locations of the stove used to warm the church in those days. The stove pipe would have been attached to one or both of the chimneys that were on the roof of the 1819 church, visible in the sampler.

In 1884, extensive renovations were made to the church, "at the expense of what was old" as Rev. Myron Rath said in the 1911 History book (I will write about the 1884 renovations at some point in the future).

As we look forward to 2016 and our 275th Anniversary, I thought it might be interesting to look back to the year of 1741, which is recorded as the year that our first church was built. What else was going on it the world in that year? On May 8 of 1741, France and Bavaria signed the Covenant of Nymphenburg. On May 23, Andrea Luchesi an Italian composer was born (died 1801.) He wrote several symphonies, concertos, and organ works and may have been an influence for both Wolfgang Amadeus Mozart and Ludwig von Beethoven. Also, Daniel Ernst Jablonski, a German theologian, died on May 25th (born 1660.) He was a Protestant reformer of Czech origin and is remembered for his efforts to bring about Christian unity between Lutheran and Calvinist (Reformed) Protestantism, the two faith traditions to which the ELCA and UCC trace their ancestry.