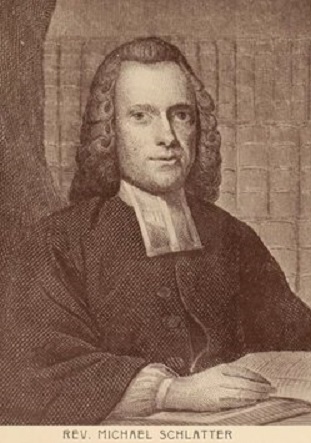 The church is very fortunate to have preserved artifacts from the past that are significant to the life and history of the church. Many of these artifacts are displayed in the Artifacts Cabinet on the front left side of the sanctuary. One of those objects is the rare “Schlatter Bible” on the bottom shelf of the cabinet. It is said that there are only 10 of these Bibles known to exist today.

Our “Schlatter Bible” was given to the church in 1753 by the Classis of Amsterdam. The name Schlatter refers to the Rev. Michael Schlatter (14 July 1716 St. Gallen, Switzerland – 31 October 1790 near Philadelphia), who came to Pennsylvania in 1746 to organize the Reformed churches (Schlatter was in many ways comparable to the Rev. Dr. Henry Melchoir Muhlenberg, who had come to Pennsylvania in 1742 to organize the Lutheran churches). One year later Schlatter held the Reformed Coetus or Synod at Old First Reformed Church in Philadelphia. All the existing Reformed churches in Pennsylvania and the surrounding area were invited to the meeting. Heinrich Roth from our church represented the congregation at that very first meeting of the Coetus that year.

Besides organizing the churches, he was also commissioned by the Amsterdam Classis to visit congregations and to write and report back of the condition, number of members, etc. Rev. Schlatter visited the Lehigh Valley from June 24 through July 2, 1747 and visited our humble log church during that time. He had found our church “vacant and inharmonious,” due to the fact that we did not have a regular minister of either Lutheran or Reformed piety and many early worshipers had gone to the church in Maguntsche (Emaus), organized in 1742 by the Moravians.

In 1751, Rev. Schlatter returned to Europe to give a report on his travels and observations in Pennsylvania, as well as Maryland, New York, Virginia and New Jersey. He wrote a journal of his experience in America and had in published that year in Amsterdam. This journal included his observations of the Reformed Church in America and their continued plight of a lack of pastors to serve the many faithful in the New World. He also included an appeal for monetary donations. The book was translated into to both German and English and was distributed throughout Great Britain. As a result of Schlatter's appeal, he was able to raise £20,000 in England and Holland for the establishment of free schools among the Germans. He was also able bring six young preachers and 800 Bibles to America.

On October 19, 1752, the President of the Reformed Coetus, Rev. Schlatter, announced that the 800 Bibles had arrived, a gift of the Synods of North and South Holland and the Classis of Amsterdam. 500 of the Bibles were Folio Bibles which had been printed in Basil, Switzerland in 1747. The Coetus decided that “upon every pulpit, in which regular ministers officiate, a large Bible be placed as a gift.” The others were to be sold at 10 shillings to church members. There were also 300 unbound octavo Bibles, which the Coetus directed to have bound and given to the poor. 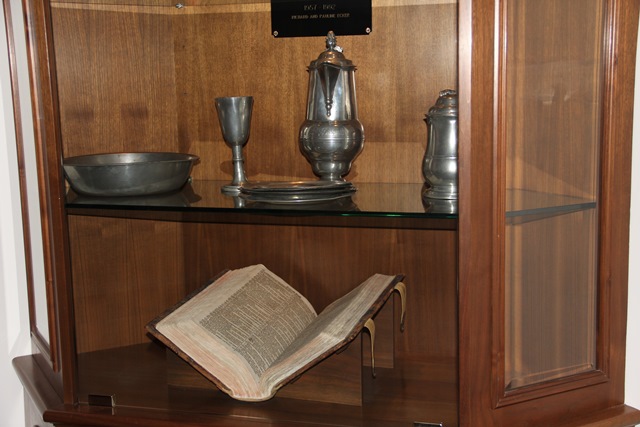 Our 1911 Church History book indicates that our Bible was received sometime that next year, 1753. It is a large Bible, containing the Old and New Testaments as well as the Apocrypha, as translated into German by Dr. Martin Luther. The Bible also contains a beautiful frontpiece and one of its front pages is inscribed in German Script by Johannes Bogert, stating that the Bible belongs to the Salisbury Reformed Congregation. The Bible also contains straps with clasps to secure it when traveling or when it is not being used. The Bible has been lovingly preserved by the church for these many years. At one time, the Bible was displayed in the cabinets in the vestibule of the church and then later, it was put away in one of the safes in the basement for safe keeping.

In 1994, the Bible was found in the safe and the Artifacts Committee of the church had the Bible restored by book binder and restoration expert Donald Rash. The Bible was entirely taken apart, each page washed in a solution that removed the acidity of the paper. Where the paper was torn or missing, especially on the edges of the paper, pages were once again restored to their proper size. The Bible was completely rebound and the sheepskin cover of the Bible was restored. Since the original straps and clasps were missing on the Bible, new straps and clasps were added to complete the restoration (According to tradition, one of ministers was in the habit of pounding the Bible when he preached. One day, his hand came down on one of the clasps and cut his hand, so he used his pocketknife to remove the straps and clasps.)

Later in 1994, the Bible was returned to the church and was the focus of a special celebratory worship service on November 20. At the 10:30 service, Richard Musselman (member of the UCC congregation and German teacher at the Brandywine Heights High School in Topton) read the scriptures in the original High German from this Bible. Since 1994, the Bible usually occupies a place of honor in the Artifacts Cabinet at the front of the church. It is taken out and used for occasional services at the church, as well as for the Educational Church History Tours that we have conducted for the Salisbury Middle School’s Sixth Grade Classes since 1997. It also traveled to Philadelphia for the 250th Anniversary of the Reformed Coetus on September 27, 1997 held at the Old First Reformed UCC Church, as well as to Longswamp Church on August 17, 2002 for the wedding of Joshua and Jennifer Fink.