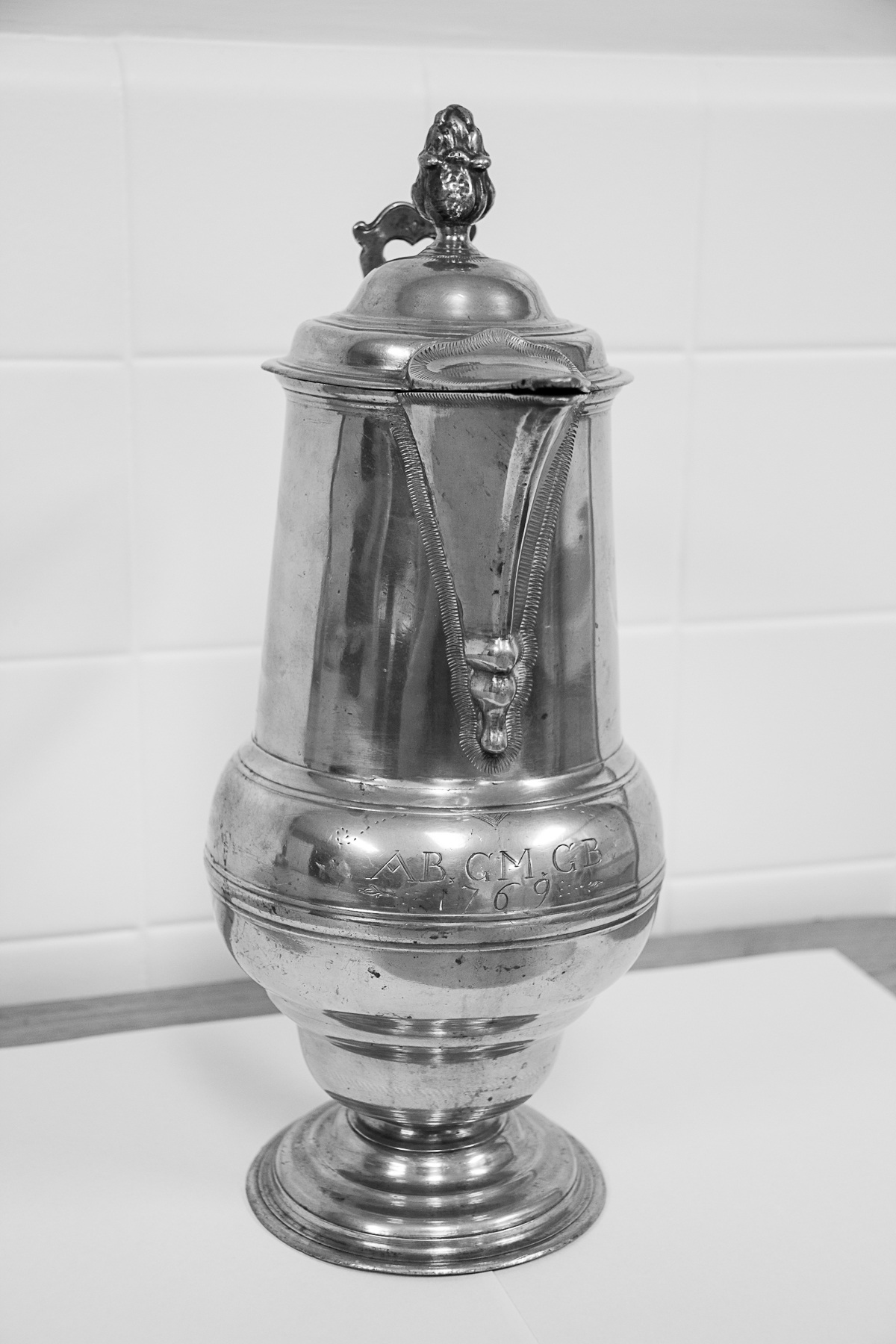 At the front of our historic sanctuary is situated the artifacts cabinet, which contains some of our most important historical artifacts. The cabinet was presented by Richard and Pauline Ecker, in memory of their son Clark (1957 – 1992.) In the cabinet are displayed our collection of Pennsylvania German pewter sacramental pieces, a set of flower vases, a silver communion chalice, and the “Schlatter Bible.” These artifacts have a place of honor in this beautiful cabinet, a visual reminder that links the present to the past.

In the colonial era, the early members of the church only received communion twice a year, usually in the spring and in the fall. As the person received communion, his or her name was recorded in the communion register (the oldest record of communion at Jerusalem Western Salisbury that I have been able to find is that of the Lutheran congregation held on March 23, 1782, most likely administered by Rev. Jacob Van Buskirk.)

In the early years of our church, bequests of money or actual items were given for church use. One of these items, today displayed in the artifacts cabinet, is the large pewter vessel that looks much like a coffee pot. That’s because the item actually is a coffee pot made by pewterer William Will. However, in the church we call it a flagon, the vessel used to contain the wine for communion. While the entire pewter communion pieces link us to our past, this one is probably the most important because it is also inscribed: “AB GM GB 1769”. A list of early bequests printed in the 1911 History Book records that a pewter communion tankard (flagon) was donated in 1769. The initials on the flagon are probably the initials of the donors, who may have been Adam Blank and George Blank (I am not sure to whom the GM refers.)

The significance of this piece was not entirely known until Gladys Rader and Lorraine Weida were conducting research for the 1986 History Book. They found that the second church building had been built in 1769, the same year inscribed on the flagon. So the piece was most likely presented at the dedication of the new frame wood church structure. The year of 1769 as the date of the erection of the second church was recorded by none other than Rev. Henry Melchior Muhlenberg, patriarch of the Lutheran Church in America. Rev. Muhlenberg recorded his labors in the church, as well as observations of his life in a series of journals, which are today in the possession of the Lutheran Theological Seminary at Philadelphia and have just been restored and preserved. It is in his entry for July 8, 1770, that he records his visit to our church (The Journals of Henry Melchior Muhlenberg In Three Volumes, translated by Theodore G. Tappert and John W. Doberstein, 1945, pg. 453):

“July 8 [1770], Fourth Sunday After Trinity…The service [at Zion Lehigh, Macungie (today Alburtis)] was ended about twelve o’clock and Squire Kl[otz] had me conveyed seven miles to the church in Salisbury Township, which the Evangelical [Lutherans] and Reformed co-operated in building last year and which they are using jointly. There I preached to a large assembly of Evangelical [Lutherans] and Reformed and also to some so-called Moravians who have a settlement nearby called Emaus. I used as my text John 3: 14, 15, “And as Moses lifted up the serpent in the wilderness, even so must the Son of man be lifted up, etc.” 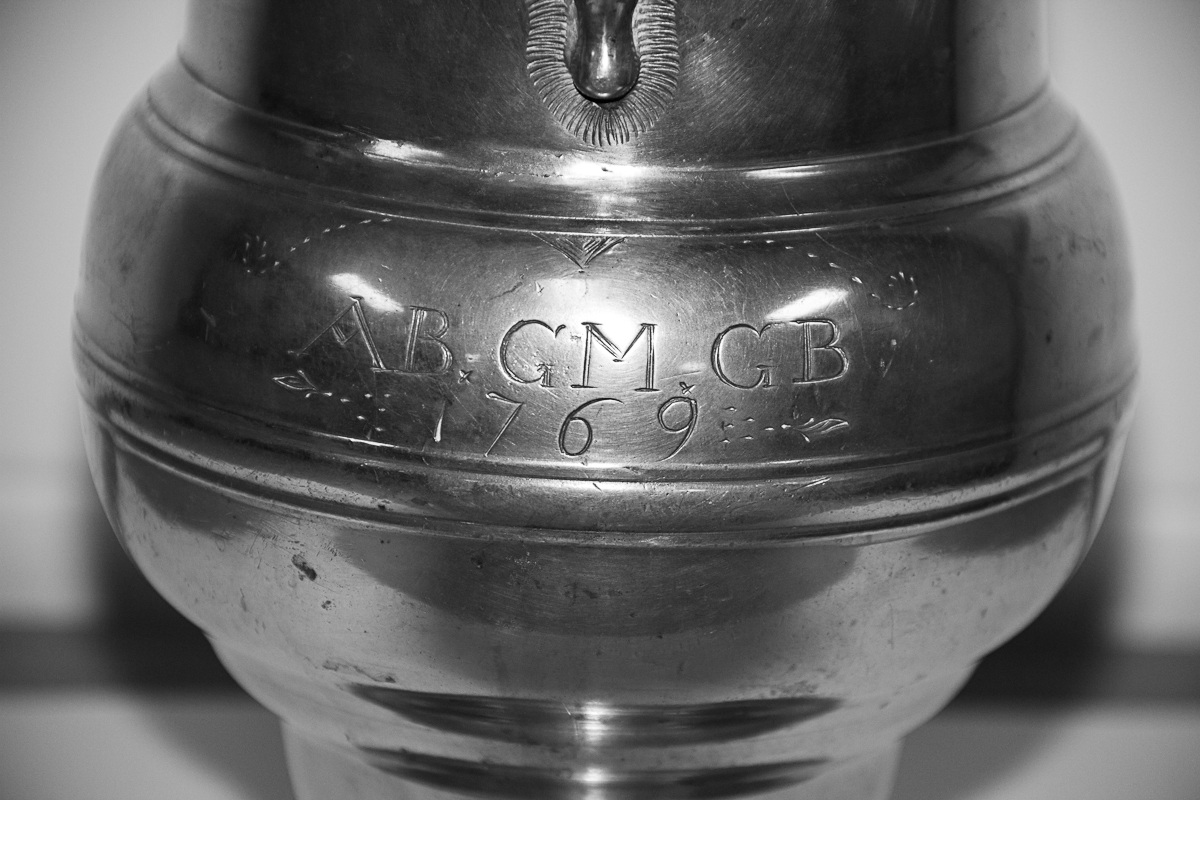 So, later historical research in the later part of the twentieth century finally linked the large pewter flagon to an important event in eighteenth century, the erection of the second church building in 1769. The Pennsylvania German pewter flagon was purchased by the Blanks and another person, for use in the communion services at Jerusalem Church. Pewter (a malleable metal alloy of tin, copper, antimony, copper, bismuth and lead) was the favored material for sacramental vessels in Eighteenth and early Nineteenth Century Pennsylvania German Lutheran, Reformed, Mennonite, Moravian and some Roman Catholic Churches because it was durable, but much less expensive than precious silver.

Our pewter flagon has been attributed to William Will, a pewterer who worked in Philadelphia between 1764 and 1798. The vessel, which bears the mark of L539 and is 12 ¾” tall, with a top diameter of 3 7/8” and bottom diameter of 4 ½”, was identified by pewter historian Dr. Donald M. Herr in his book Pewter in Pennsylvania German Churches, published in 1995 by the Pennsylvania German Society (the book lists and pictures all of our pieces and the church is listed as “A Union Church in Lehigh County, PA.) Although the flagon is not signed, Dr. Herr identifies it as a William Will piece because it is almost identical to a signed piece that is now in a private collection.

William Will was one of the most prolific pewterers in colonial America, as well as an ardent patriot. The fourth son of pewterer John Will, William was born in Neuwied on the Rhine River, in the north of the modern German state of Rhineland-Palatinate on January 27, 1742, the year after our church was founded. In 1752, he came to America with his family and learned the pewter trade from his father and brother Henry. He moved to Philadelphia in 1763 and the following year married Barbara Culp at the First German Reformed Church in the city. By 1772, he moved his shop to Second Street, where he prospered. At the beginning of the American Revolution in 1776, he raised a company of infantry associators. He later was a Lieutenant-Colonel in the militia and was appointed to various important Revolutionary posts. In 1780 he ran for sheriff, a post to which he was reelected twice, and later in 1785, was elected along with Robert Morris as a representative to General Assembly of Pennsylvania. He fell on hard times in 1789, declaring himself bankrupt, and much of his property was sold at various sheriff sales in subsequent years. He died on February 14, 1798 and was buried in the burial grounds of the First Reformed Congregation. Judging from the variety and sheer number of extant pieces made by Will, it has been said that his pewter was of the highest quality and workmanship.

Our pewter flagon is the finest piece from our collection of sacramental pewter that has been preserved by the congregations over the years. This collection includes the flagon, a chalice, a basin, a tankard and 8 plates or patens. So the next time you pass the artifacts cabinet, be sure to gaze upon this pewter piece which dates to the erection of the second church in 1769.