Each year since 1996, our historic church has hosted 6th grade students from the Salisbury Middle School as part of their Integrated Outdoor Education Program. In addition to the church tour, the students do activities at other outdoor venues including the Little Lehigh River.  When the students come to the church, they go on an educational church tour ... and "step back in time."  In the first part of the tour, students meet characters from the past dressed in period garb and learn about the Pennsylvania German Immigrants, the establishment of the first church in 1741 and what life was like for our ancestors in those early colonial days on what was then the frontier. 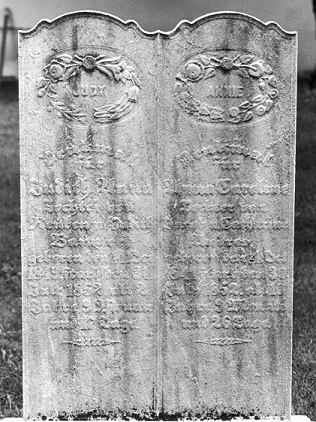 On the cemetery portion of the tour, we visit one of the most unusual tombstones on the cemetery, a "double" tombstone that looks like a bed. The tombstone belongs to two children, Judith "Judy" Anna Baumer (14 October 1849 - 31 July 1852), daughter of Reuben and Judith Baumer, and Anna "Annie" Caroline Andreas (4 October 1841 - 30 July 1852), daughter of Jacob and Catherine Andreas. If you notice, the two children died one day apart, so I was curious as to what brought about their demise. According to the death notices in the Thursday, 5 August 1852 edition of the Allentown German newspaper, Der Unabhaengige Republikaner, both girls died of scarlet fever in Lower Macungie. The Lutheran Pastor of the church, Jacob Vogelbach, preached the sermon at the funeral, which was held on Sunday, August 1. As evidenced from Annie Andreas' parents tombstones which are located to the right of this tombstone, her mother Catherine Andreas' maiden name was Baumer, most likely making these wo children cousins. Judging from the children's deaths only one day apart, I surmised that the children most likely lived near one another and both children contracted scarlet fever. (Scarlet fever is highly contagious and could easily have spread from one child to the other.  Symptoms of scarlet fever are sore throat, high fever and a characteristic red rash. Many years ago, this disease often resulted in death, especially in young children, as antibiotics were not yet developed. To this day, there is no vaccine for it).

Digging deeper into the story of the deaths of the girls, I tried to locate them in the 1850 U.S. Census. It turns out that the Reuben Baumer family and the Jacob Andreas family were indeed living two doors apart from one another in Lower Macungie Township, with Margaretha Andreas, Jacob's mother, living in between them.  However, Judith Anna Baumer, nine months old at the time, was actually living in the household of Jacob Andreas, rather than with her father Reuben.  Noticeably absent in the Reuben Baumer household was his wife Judith. This led me to believe that perhaps Judith had died sometime after the birth of Judith Anna.

Looking in the cemetery record book, I located the tombstone of Judith Anna's mother, Judith Baumer, only three rows away from the Andreas plot. Judith Baumer, daughter of John Ehret, was born 27 June 1811 and she died 4 December 1849, less than two months after Judith Anna was born. Her death explains why Judith Anna was living in the Andreas household. The young child needed a mother to take care of her, and the family must have decided that Catherine (Baumer) Andreas, Reuben's sister, would care for the newborn child.

So there you have it. This interesting tombstone has an even more fascinating story that is characteristic of the era in which the children lived, as infant and child death were very common before the invention of modern medicine.

I appreciate the positive responses to my articles and I am pleased that people are interested in the rich history of our church.. If you have a curiosity about our church and its history, please contact me through the church office or at Finkyx@aol.com.